Hiking in the mountains in the snow – those who know me know this is not my idea of a good time. However, my Eagle Scout husband and newly inducted Scout son see it as a grand adventure.  And so the preparations began in earnest, as the tab for all the needed equipment escalated more rapidly than the National debt.

By Friday evening, all was in readiness for the pre-dawn Saturday morning departure. My husband went to help our daughter straighten her bed on its frame, but she soon came downstairs, saying “Dad needs you. It’s his back.” With my heart in my stomach, I went upstairs to find my husband lying flat on his back, unable to move. Not exactly where you want to be the night before a hiking trip with a bunch of Boy Scouts.

After a long soak in a hot bath and some pain medication, it was only minimally better.  By morning, he stiffly got ready and couldn’t even lean over to tie his shoes. I couldn’t imagine how he could hike six miles with a pack on his back, but he was determined since it was our son’s first big outing and the troop was counting on him. Another Scout mom lightheartedly remarked to me, “If they do have to tote him down the mountain on a stretcher, it will count toward their First Aid Merit Badge and will probably count as practice for the next camporee!!”  Small comfort, but I appreciated the humor.

This fierce determination to push himself is not his typical character, but then I realized what had happened.  Our roles have changed.  When our children were babies, I would be up multiple times in the night, rocking them and soothing away the pain and fear. Even when I didn’t “feel like it”, it was what I did because they needed me. Now they’ve been sleeping through the night for years, and most of the time would choose to hang out with Dad rather than spend time with me. I have seen my role shifting, but did not realize that I was trading places with my husband.  Now I am the one in the background, keeping the pieces together while he is in the forefront, providing the needed security.  He went, not because he wanted to, but because he knew he had to.  That I understand.

They returned this afternoon, tired and smelly and happier for the experience. And his back didn’t even hurt (much) while he was gone. 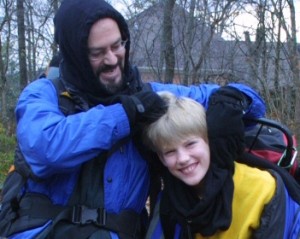