He leads me beside still waters; he restores my soul. So go the words from Psalm 23, verses I have heard in various forms all of my life. But I think I just finally GOT what those words really mean. He can’t restore your soul unless there is something missing. And in my early years, there wasn’t. Not really.

But the last few years – okay, pretty much the last decade- would fall into the “this is not what I signed up for” category. Life in its various forms took a toll on our family, and the stress had become overwhelming at times. As we have created a new normal over the last year or so, I have gradually been able to let go of that stress and relax in a way that I had almost forgotten how to do.

At the beginning of the summer, I began waking up early and sitting out on my deck, reading, journaling, or just enjoying nature. This was not a planned thing; I just woke up so I got out of bed. Soon I began craving that time, looking forward to waking up at 5:30 or so just to have my time alone before anyone else was stirring.  Often, I would be there for two hours or more. I needed that time alone, though I wasn’t entirely sure of its purpose. 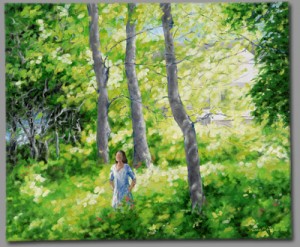 I mourned the beginning of August because I knew that the school routines would start again, and my quiet mornings would be replaced with cries of  “What can I pack for lunch?”,  “Where are my socks?”,  and of course,  “Did you sign my permission slip?”

Not that I don’t love being a mom. I do. I really, really do.

I had just found a connection to a deep part of my soul that had been disconnected for so long that I hadn’t even realized that it was missing.

I tried to rearrange my schedule to allow for coffee on the deck after the kids were off to school. We are three weeks in to the new routine, and I find that the joy in this alone time has diminished.

As I sat here this morning, the words flowed through my mind: He restores my soul.

That’s what the early mornings this summer were all about. He restored my soul. That’s it. Whatever else I read, thought about, or discovered during that time, the purpose was simply to restore my soul.

I find that I am no longer waking up early on my own; it’s back to being greeted by radio voices as I stir from my sleep. It is still relaxing to sit and reflect, but the need for it is not there right now. In fact, I sit here with a sense of  anticipation of things to come.

He restores my soul.

I am filled up enough to give again.

Life is back in balance.