Traditions. We all have them, from religious rituals to which kind of stuffing you expect with your Thanksgiving turkey.  Traditions are, by definition, customs that are handed down from one generation to the next. But is it possible to start new traditions?

I have heard that with children, something becomes a tradition if you do it more than once the same way. And we certainly developed a unique Christmas tradition in our family because of a spontaneous purchase one Christmas when our kids were small. I thought it would be fun to get them cans of Silly String, not knowing that I was starting a whole new Christmas morning routine. It is now expected that each child will have at least one can of silly string in their stocking for the Christmas Morning Silly String Battle. And woe unto me if I should forget the importance of such a tradition!

We have also added new traditions that enhance our faith; or perhaps I should say that we have resurrected long- forgotten traditions of our faith and we celebrate them in a new way. When I first learned that the Christian tradition of communion was based on the Jewish feast of Passover, I was astonished. I attended a traditional Passover Seder and began studying about Passover and the other Jewish feasts. Imagine my surprise to discover that in Leviticus, God commanded the Israelites to keep these feasts forever as a reminder of what He  had done for them. He didn’t say until you get to the Promised Land, or until the Messiah comes, or until you get tired of doing it. He said forever.   So I figured that probably means that we Gentiles who got His word later had some catching up to do.

Now, I don’t want to start a debate about whether or not Christians are obligated to observe the Jewish feasts, but I will say that when our family and friends have celebrated these events together,  we are blessed and our faith is strengthened through the experience.

Which brings me to today – Rosh Hashanah. 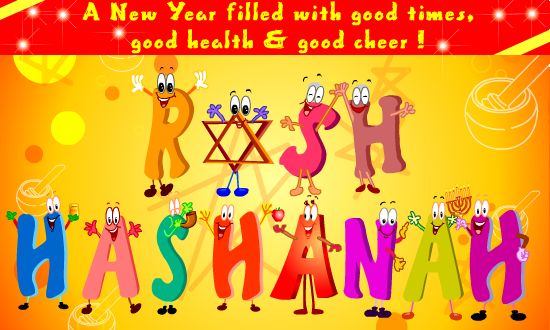 Today is the Jewish New Year, also celebrated as the Birthday of the World. That’s an easy way to introduce this holiday to your kids – who doesn’t love a birthday? The first year we celebrated it, we had a birthday cake for the world and thanked God for His creation. Traditionally, apples dipped in honey are served to remind you to have a sweet new year. Again, an easy activity with kids.

As our kids grew, and our understanding of the holiday grew, we added more of the Jewish traditions and traditional foods.  A hallmark of the celebrations is the blowing of a shofar, which is a long, curled ram’s horn. We don’t own one yet, but it is on my wish list. (We have substituted my husband’s old Boy Scout bugle.)

My favorite part of the Rosh Hashanah celebration is called the Tashlikh, which is a time when everyone gathers by a river or other body of water and empties their pockets or throws stones into the river. Some traditions tell you to write on the stone something that you want to be forgiven for, and the act of throwing it in the water symbolically gives you a fresh start. I like to think of the verse where God tells us that He throws our sins “as far as the East is from the West”. I imagine Him throwing whatever I have written on that stone, and envision it disappearing in the water.

We all need a fresh start once in a while, and I love this holiday for its reminders to throw away the old and start fresh in the new year. The fact that it comes in the fall when we are all starting back in our school routines also makes it a great opportunity to reflect on how we want things to be different in the coming months.

In what areas could you use a fresh start?

If you’d like to learn more about Rosh Hashanah and how to celebrate it in your home, I highly recommend this book:  A Family Guide to the Biblical Holidays by Robin Sampson and Linda Pierce.