That was the tagline for Ali Brown‘s Shine event, held November 5-7 in Las Vegas, which I was privileged to attend after having won a scholarship by submitting a video about myself and my business. And for me it was an unforgettable and truly life-changing experience. 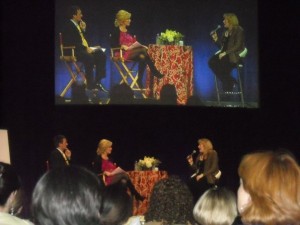 I was thrilled and honored to be chosen as one of the Scholarship recipients and completely shocked to then be chosen as one of the three candidates for a mini- business makeover on stage with Ali and James Roche . It was such a confidence booster for me to see my ideas taken seriously and I was humbled by the generosity of so many people in the room who sought me out afterwards to offer leads and ideas to help me grow my business.

I have known over the past year that the time had come for me to really grow my new business, but I kept holding back and couldn’t figure out the root fear. But I nailed it during Shine.

I was afraid that the more I succeeded as a businesswoman, the more I would fail as a wife and mother.

Until I came to this conference and heard the stories from women running six and seven figure businesses out of their homes, I subconsciously believed that women had to make a choice between being a nurturing, loving mother and a hard-nosed, determined business woman. I didn’t think it was possible to be loving, feminine, passionate, AND successful in business. Now I know how wrong I was.

I am no longer worried that as I build my legacy that my family will crumble behind me. Now I see that I really can build a business that I love in a way that fulfills me and enriches my family at the same time. What a blessing that weekend was for me!

On the heels of that transformation in my thinking came the decision in the last few days to invest heavily in myself and my business to grow it substantially over the next year.

Talk about scary! I haven’t invested this much money in myself since paying for college ( okay, never… my parents paid for my college!)

But I know, deep down,  that it is the right decision. As  Alexis Martin-Neely, The Intrepid Mompreneur, says, its about being afraid and doing it anyway.

Do you have that little nagging voice that creeps in from time to time to tell you what a fool you are? Well, it came to visit me last night, as I knew it would. So, I fought fear with faith. I woke early this morning and prayed that God would clearly show me if somehow I was on the wrong path.

God may have spoken to Moses through a burning bush, but for me, He uses songs. Even if I have  heard a song dozens of times, all of a sudden, it is playing just for me. And that’s what happened today.

I dropped the kids off at school this morning just as this song by Sanctus Real began playing on the radio:

I nearly had to pull off the road, blinded by my own tears.

But once was not enough.  God wanted to be sure I got the message loud and clear.

I pulled myself together, ran an errand, and got back in the car. This time, as soon as I turned the key, a Matthew West song was playing:

Helena Summer Medena, a fellow Shine Scholarship recipient, wisely pointed out that other people suffer when we are not doing all that we were put on this planet to do. I don’t want to spend my whole life wondering  what if? …what if?. and  the voices in my head have held me back long enough. It is time for me to step fully into who I was created to be.

So, just like the scene in the Indiana Jones movie, I’m stepping onto that invisible bridge. It’s scary, it’s exhilarating, and I know  it’s going to be oh, so worth it.

One thought on “Shining through the Chaos”