Group presentations. One of my least favorite memories from high school!

My ninth grader was assigned his first group presentation in history class with two other boys he knew from his previous school. They were to have one week to work on it, but the illness of one combined with unexpected snow days left two of the three of them with one class period to prepare. I had encouraged them to talk on the phone while school was out and to at least map out a plan of what they were going to do. They did talk some, but I think the lure of days off was too great.

However, he came home from school Thursday confident that they had put together a nice Powerpoint presentation, which he had on his flash drive, and he just needed to make a poster. Being the cautious and somewhat fatalistic mother, I asked if they had made a backup copy of the Powerpoint file. No, his partner didn’t have Powerpoint at home, so they hadn’t seen any reason to make two copies of it; my son had the only copy even though the other guy would be giving the presentation. It all made sense to them.

We made the poster, did our evening activities, and went to bed. As we were walking out the door in the morning, I suggested that he double-check to be sure his flash drive was in his backpack. It wasn’t.

There was a ten minute flurry of activity as every couch cushion, pants pocket, and bed cover was overturned in a frantic search for the crucial two-inch long device. No luck.

As I saw his eyes filling with tears and the panic squeezing his throat, I knew that I had a choice to make. I could deliver the mommy lecture that was on the tip of my tongue and ensure that he left the house feeling defeated, or I could use the opportunity to teach him some valuable life skills.

So, taking a deep breath and fighting back all of the I told you so’s clamoring to escape my throat, I said, “Okay. You’re about to learn a great lesson in adaptability!” I quickly grabbed a coffee-table book that we own on his subject and told him to head to the van. His presentation was in his first period class, so there really was no extra time.

On the way, I had him write out whatever details he remembered from the powerpoint and think about how to use the pictures we had. I shared my own experiences of speaking “off the cuff” and assured him that the most important thing was to appear confident in what he was saying, and that I knew they would be fine.

There was just enough time to run into the school library and print out a couple more important pictures. The first bell rang. The printer didn’t work. With the librarian’s help, he got the pictures printed, with two minutes to get to class. “Confidence,” I said, as we parted ways. “You can do this.”

He told me that afternoon that all three guys were able to divide up the resources they had, deliver their talks, and no one else was the wiser. The teacher even told us at parent night that they had done a nice job.

As I watched him walk down the hall that morning, I felt like the mother bird screaming “Fly, fly, fly” to her fledgling on the ground as the hungry cat lurks nearby.

He did fly, with only minutes to spare, and those wings are getting stronger every day. 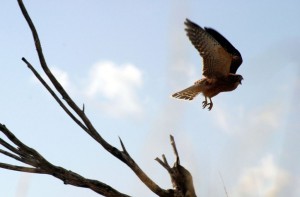